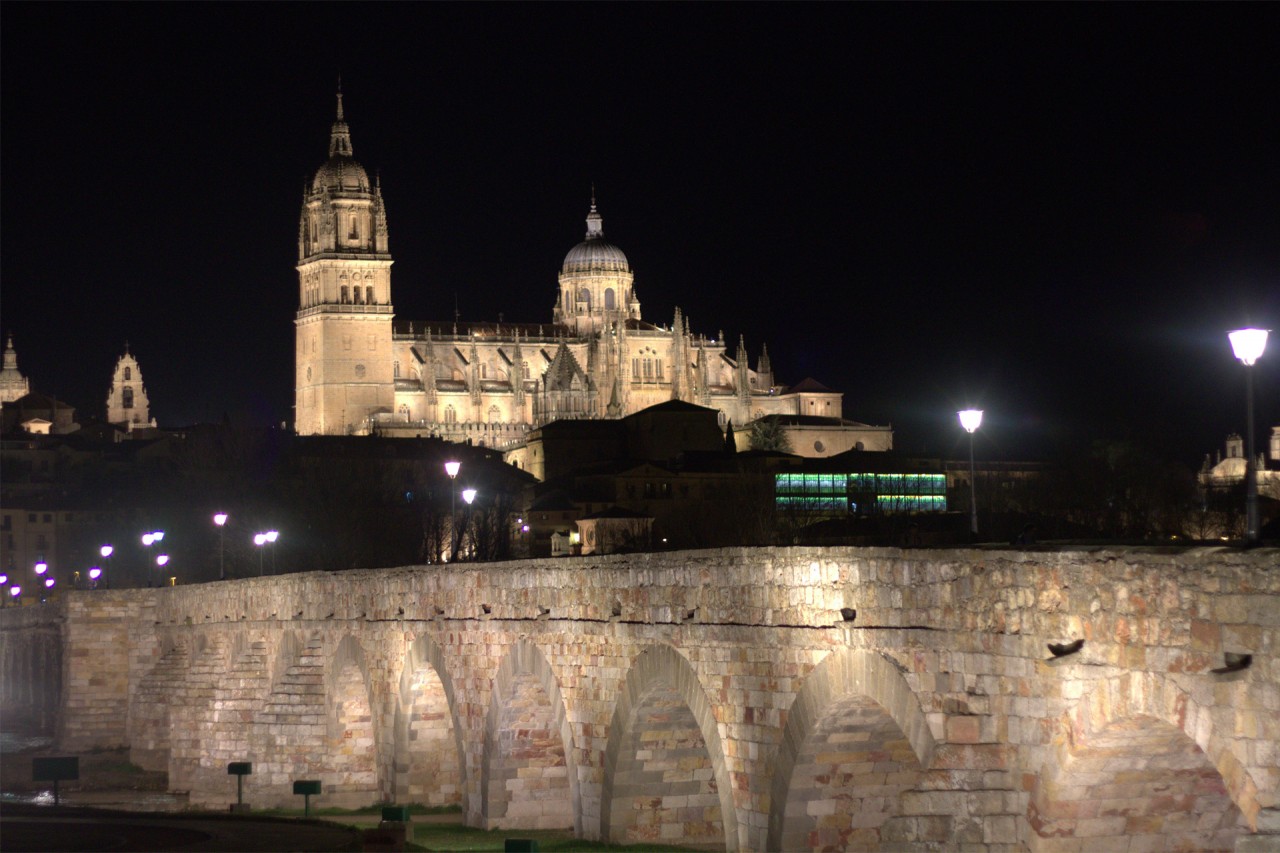 I had the most wonderful time exploring Spain last year and have been answering quite a bit of emails about the places I went after posting up photos of them on my Instagram account (@renzze). Previously, I’ve shared “6 Cities to visit in Spain from Madrid“  but this month, I will be sharing a little more about each of those cities based on questions I’ve received about them in the last 6 months from readers and friends. Continuing on my `Best of my trip to Spain’ series, this post is dedicated to answering questions on Salamanca.

How do I get to Salamanca?

Situated approximately 200 km off Madrid, the easiest way to get there is via the Renfe trains, Auto-res buses or by driving. From Valladolid International airport, it’s a 1.5 hour bus journey. Salamanca is linked with the capital, Madrid, by the A-50 road, while other Spanish towns such as Gijón, Zamora, Cáceres and Mérida can be accessed on the A-66. You can get to Salamanca from Portugal in a few hours on the A-62 motorway.

In addition to driving a car, you can also use the bus in order to access the city from other points of the peninsula such as Madrid, Barcelona, Seville, Zaragoza and Santander, and from international destinations such as Bordeaux, Hamburg, Lyon, Munich, Nice and Paris. The bus station is in the city centre, close to the historic centre.

The train is another good option for making the journey to Salamanca in complete comfort, from places like Madrid, Ávila, San Sebastián, Bilbao and Barcelona, amongst others. There are also direct services to Portugal, and there are connections to other international destinations using the Irún-Hendaya line. The railway station is in the city centre and is also a modern shopping/leisure centre which catches the eye on account of its unusual design. You may consider getting the Renfe Spain Pass. This pass offers the chance to travel around Spain for all non-residents. This system is very practical, as it can be used on all AVE long-distance and mid-distance high-speed trains. The Renfe Spain Pass is valid for one month from the first trip and comes in two formats  (Business/Club and Tourist). It can be purchased up to six months in advance, and is available for 4, 6, 8, 10 or 12 journeys. More information: Renfe Spain Pass.

How do I get around in the city?

The city has a few bus lines but the best way to get around the place is on foot as all the major attractions are pretty close to one another.

The Old City of Salamanca was declared a World Heritage Site by UNESCO in 1988. Salamanca is one of Europe’s most impressive Renaissance cities. The city features a number of sandstone buildings that emit a golden glow. Because of this feature, Salamanca has been labeled “the golden city”.

You can’t miss the Roman Bridge of Salamanca. Of its 26 arches, 15 are Roman of the 1st century BC. Nearby are the Mudéjar Romanesque church of Santiago (modern reconstruction) and the stone bull quoted in Lazarillo de Tormes.

The University of Salamanca is said to be the third oldest university in Europe, founded in 1218. It is one of the most important university cities in Spain and supplies 16% of Spain’s market for the teaching of the Spanish language. Salamanca attracts thousands of international students, generating a diverse environment.  You can explore the set of buildings that made up the former University of Salamanca, including the Escuelas Mayores, Escuelas Menores and the Hospital de Estudio (current rectorate). These buildings are situated around the square known as Patio de Escuelas. In this same square is the home of Dr. Álvarez Abarca or of the Doctors of the Queen (15th century), whose façade is Gothic with Renaissance details and is now the Museum of Salamanca. Other learning centers includes the Fonseca College and Anaya Palace buildings. The local saying in Salamanca is that if you can spot the frog on the skull in on the entrance wall of the University of Salamanca, you’ll be likely to pass your exams with flying colors! Happy searching!

There are many religious buildings, churches and cathedrals in Salamanca. I had a lovely time walking on the rooftops of Cathedral Nuvea and looking out for cracks caused by the Lisbon earthquake of 1755. The cathedral was miraculously unharmed and many who were attending a mass service when the earthquake hit felt that it was God who protected them for the number of deaths would have been significantly higher otherwise. Look closely at the thousands of carvings on the outer walls and you can spot an interesting astronaut! You might be wondering what a modern invention might be doing on at 12th century building but it’s important to note that the church has gone through many phases of upkeep and construction and sometimes the artisans would put up carvings that they feel should be immortalised for the understanding of future generations.

The Convento de San Esteban, of the Dominican friars (16th century) has a plateresque façade, with its shape of an arc of triumph, is a jewel of the Salamancan Renaissance. Impressive Baroque altarpiece by José Benito Churriguera. Also noteworthy is the Cloister of the Kings from the Renaissance.

Baroque styled and designed by architects Alberto and Nicolás Churriguera, La Plaza Mayor is the most important of public spaces and the heart of the city. It was built in the 18th century and is considered as one of Europe’s best squares. At the time of its construction it was the main site for bullfights and has a seating capacity of 20,000. In the present day, the Plaza Mayor is an administrative building with a number of offices, shops and restaurants.

I didn’t get to experience this as I was there in Spring but Salamanca is home turf for Spain’s bull-breeding industry, with bullfighting as an integral part of the town’s culture. Bullfighting season takes place during the summer months, June through September, at the bullring, “La Glorieta”. The 10,000-seat venue also hosts concerts and a variety of events through the year. Also located in Salamanca, the Museo Taurino (bullfighting museum) enlightens visitors about the history and tradition of this age-old and controversial pursuit. For the oldest bullfight arena in Spain, head to Castañar bullfighter arena which is just around Salamanca.

Cured hams of pork meat that are produced in Guijuelo, a village in the Southern part of Salamanca, are among the most famous Spanish delicatessen. I love the 2nd floor view while dining in one of the restaurants at La Plaza Mayor. Great for people watching as you soak up the views. For dinner, do make reservations in advance for Víctor Gutiérrez restaurant. If you would like to dine in your hotel, the Parador de Salamanca has a lovely restaurant serving young Morucha beef, suckling pig, Ibérico ham from Guijuelo, beans from La Alberca and sweet desserts such as bollo maimón (sponge bundt cake).

Exceptional viewpoint overlooking the historic district of Salamanca from the hotel room.

Where should I stay?

I had a brilliant stay at the Parador de Salamanca which stands opposite the old quarter on a small hill on the left bank of the Tormes River where it passes through this beautiful city. The interior is elegant, comfortable and spacious. Large windows and French doors make the hotel an exceptional viewpoint overlooking the historic district. The panoramic views of the provincial capital from the function rooms, swimming pool and most of the guest rooms are the best in the city.

Thank for reading and have a good week! 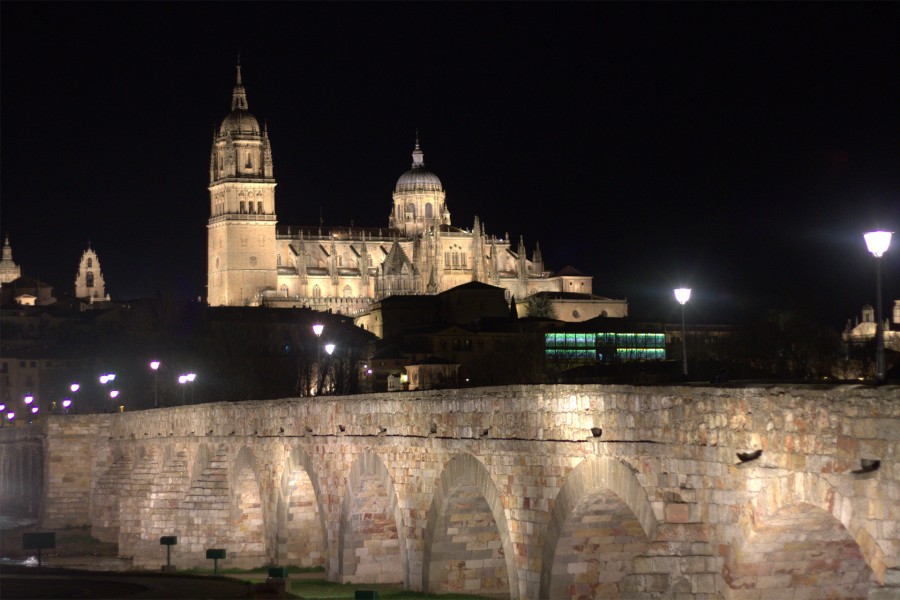