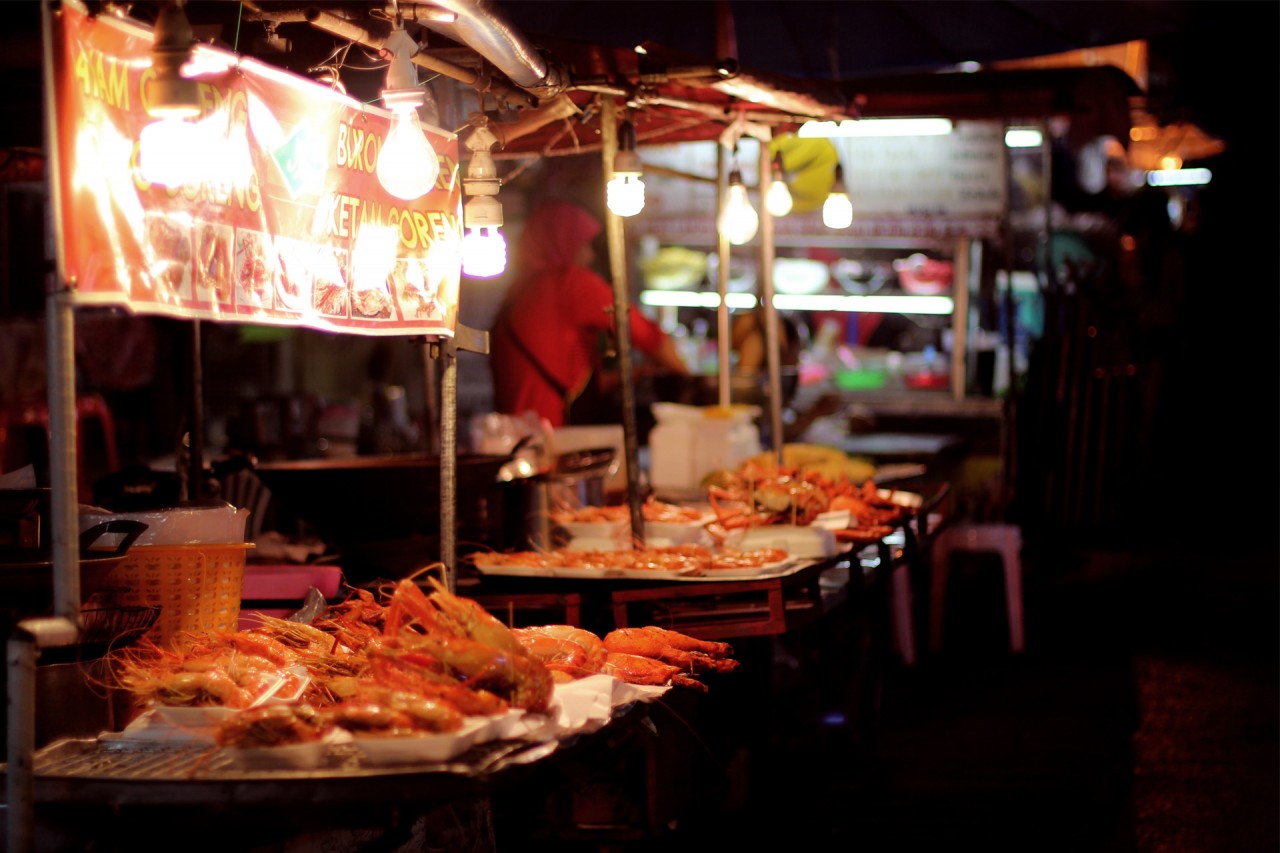 For this week’s {Travelling Tuesdays}, let me take you to the night scene in Hat Yai, Thailand.

I stayed at Centra Hotel in Hat Yai which is strategically placed in the heart of the city. Just next to the hotel is the Central departmental store which houses all the brand name items. Nearby, you have Gimyong market and Santisuk Market, renowned for its wide variety of electrical goods as well as multitude of street stalls selling an abundance of fruits and other products at attractive prices.

The night life surrounding the hotel was bustling with life! Our group split into two with half wanting to chill out and drink and a local pub and the other half wanting to explore street food at the night market. I went with the latter group as I can never resist Thailand’s street goodies.

With endless choices of food, there is no need to worry about midnight hunger pangs.

These baby pineapple are super cute and super sweet. As far as I know, I’ve only seen them sold in Thailand.

Look how huge the grilled seafood, prawns and lobsters are!

I’ve an allergy to seafood (except fish) so I settled for the delicious fried chicken and fresh coconut combination instead. The sweet coconut water was refreshing and helped washed away all the sinful oiliness of my late night snacks.

A must-buy at Thailand night markets for me is the mango sticky rice. Cheap and good.

If mangos are not your thing, there are noodle stores and dessert stores galore.

Love the super colourful local ice jelly dessert even though I can’t make out what combination of jelly and fruits they mixed in together.

I was told that they grow chestnuts in the area and have very tasty coffee beans and charcoal fried chestnuts. It looks good but I was completely stuffed with all the street food I bought earlier, I had to give it a miss.

There are also quite a few hippy looking cafes and bars if you just want to  chill and people watch.

Personally though, I would go seek out the local Bird’s Nest store instead. For those unfamiliar with this Chinese delicacy,  edible Bird’s Nest or yàn wō (燕窝)  is woven by swiftlets from their saliva. Particularly prized in Chinese culture due to their rarity, it is one of the most popular tonics in Traditional Chinese Medicine (TCM). They are among the most expensive animal products consumed by humans but since it is considered a local produce, you can expect it to be cheaper in Thailand than in Singapore.

There are many selections and grades of Bird’s Nest available. The white nests and the red nests are supposedly rich in nutrients, which are traditionally believed to provide health benefits, such as aid digestion, maintain youthfulness, enhance complexion, improve voice quality, alleviate asthma, and benefit the immune system. It is rich in Epidermal Growth Factor (EGF) which is the substance that is responsible for skin and tissue repair.

Natural red cave nests are often only found in limestone caves in a bird nest concession island in Thailand. Contrary to popular belief, the colour of red Bird’s Nest is not from the swiflet’s blood but caused by either oxidation or minerals absorbed from the environment.

At the store, you can see the workers handpicking all the impurities from the Bird’s Nest manually. A very labour intensive process.

You can order cooked Bird’s Nest for immediate consumption at the store. Prices varies from SGD4 to SGD35 a bowl depending on quantity and grade of Bird’s Nest. You can also choose it to be served hot or cold.

I’m no Bird’s Nest expert and normally just order the mid-range (about $12 a bowl) Bird’s Nest to be served cold.

As an added bonus, the store gives you free flow of Ginseng tea as well.

Looking at these photos makes me long for the yummy Bird’s Nest and mango sticky rice again!

Thanks for reading and have a great week.