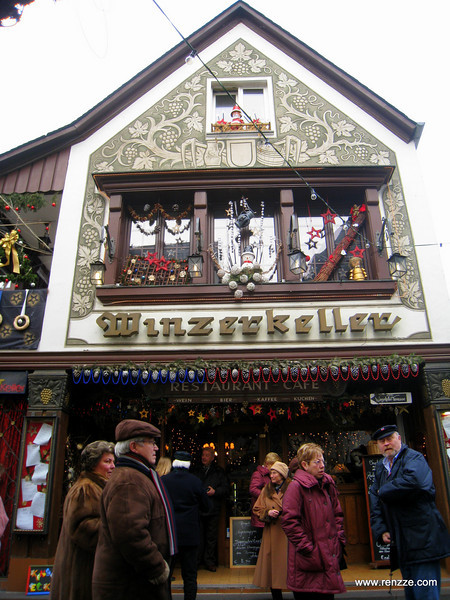 Leaving Frankfurt right after breakfast to catch the early train at Frankfurt (Main) Hauptbahnhof (the busiest railway station in Germany) to head down to Rüdesheim.

Rüdesheim am Rhein is the winemaking town in the Rhine Gorge of Germany. It is one of Germany’s biggest tourist area, 2nd only to Cologne Cathedral.

The Rhine River looks very beautiful even though the weather was too chilly for a river cruise. It actually looks something you would pick right out of a painting! I could sit there forever and admire the scenery if not for my frozen fingers and ears. It was time to head into one of the quaint cafes in the area for a comforting cup of hot chocolate and soup. Both of which are my staples when I’m in winter-lands.

After getting those hot liquid into my system, I was ready to brave the harsh weather once more. Rüdesheim is very well known for its excellent wine, the Rüdesheimer Berg being among Germany’s best winegrowing areas for 1000 years.

Brömserburg, the oldest castle in the Rhine Gorge was built in the 10th century on the site of  a Roman fort. From the 10th to the 13th century it was owned by the Archbishop of Mainz then passed into the control of the Knights of Rüdesheim. The castle withstood a number of attacks in several wars before the town of Rüdesheim bought the castle in 1941. Today it is a wine museum. It has a more than two-metre-thick walls and a metre-thick vault tower. Originally, it was right on the bank of the Rhine, surrounded by water.

Since I had gone in winter, the grape lands were all barren! But the amount of land devoted to winemaking was no less impressive. And I took a hike around the estate to see the views from high up. Wine is so important in this area that their old traditions and festivals revolve around he Weinkönigin (“Wine Queen”) with her princesses.

The town of Rüdesheim is very pretty. The cafes and buildings retained much of it’s heritage and you can feel the remnants of the knights that once ruled over this land. I had a great time walking through the many little shops and cafes.

You cannot imagine the many shops here that sells all sorts of Cuckoo clocks! From the tiniest palm sized once to the ones that are as large as 2 bedrooms. It’s insane! And they sell lots of swords and armor as well. If I didn’t know better, I would easily believed that I’ve walked into one of the villages in my bedtime stories.

One of the main attractions in Rüdesheim is the Siegfrieds Mechanisches Musikkabinett. I had no idea what it was when I first saw it… I was frantically trying to make sense of the posters that were in Germany outside the museum. Well, it is actually the first German museum for data-storage musical instruments. Lots of antique musical clocks and self- playing instrument such as the Hupfeld Phonoliszt Violina with six strings.

I’ll leave you guys with a video and will post more on my next leg in Germany soon!

PS – I’ve changed my blog banner if you noticed =)