Whenever I mention Macao, invariably, people will mention Casinos. Macao’s image as a Las Vegas of the East is a solid one but beyond all the glitz, glamour and dazzling casinos lies a quiet side of Macao that I came to know and enjoy.

Macao, until the last decade of so was actually a rather sleepy town. To get a glimpse of the old Macao, all you have to do is get yourself out of the casino strip and head to Coloane and Taipa.

Heading to Coloane in the morning gave me the advantage of being able to have breakfast at Lord Stow’s Garden Cafe. It’s an expansion of the original famous Lord Stow’s Bakery (which is just behind) where Portuguese egg tart was born.

You should not leave Macao till you’ve savored these amazing Portuguese egg tarts fresh from Lord Stow’s oven. I highly recommend that they be eaten nicely warm and crisp from the oven as they don’t seem to taste as delicious after a few hours.  If egg tarts alone isn’t enough for your hearty breakfast appetite, you’ll be glad to know that they also serve quite a few breakfast options there as well.

Alternatively, if the weather is cool, you could go straight to the original Lord Stow’s bakery to buy some egg tarts and light bakery snacks for a small little picnic by the sea or at the pier.

The bakery is just behind the Garden Cafe and is always bustling with locals and tourist trying to get their hands on the freshest bakes of the day.

On the way to the pier, you’ll walk past a few dried seafood stores which are remnants from a time where there was no refrigeration and  dried seafood was a popular diet.

While dried seafood does not have much appeal to the modern diets, I love the quiet old town vibes of the villagers that are struggling to maintain the traditions of the past.

On the pier, you can see Zhuhai, China just across the river and I was amazed how close we are to China.

Like Singapore, Macao has a rich colonial past and the pretty mustard colored, baroque style, Chapel of St Francis Xavier is a clear indicator of its history. Sitting at the end of a colonnade courtyard in the most welcoming fashion, you will see both tourists as well as locals going in to whisper their prayers. Built in 1928, it still serves as a functional Catholic church to the Macanese and expat community of Coloane.

Not too far from the church are pretty alleyways which the locals dubbed as 美人街 “Beautiful Women Street”. How and why it was called so, I wasn’t told but I do know that the rustic vibes of the original shop houses in those streets make for a pretty photo.

In fact, there are many abandoned building that nature has reclaimed in the years that it has been abandoned.

You could spend a day taking OOTDs and observing the daily life of the villager away from this glitz and glamor of Macao.

Although the name states it’s a village, this area is a lot more commercialized and modern compared to Coloane. We were told that the must visit place in Taipa Village is called Rua Do Cunha which is the 美食街 or food street of the area. It was lunch time when we arrived and the streets were just crowded with people. There is huge array of food stalls as well as some flea market stalls.

We headed to the very famous 50 year old Tai Lei Loi Kei for lunch. They are the creators of the famous Macao pork chop buns and have since open branches all over including one in Singapore. Even today, they still run the place as a family business and I got the chance to speak to the daughter of the creator (who has since taken over the business) as well as her nephew to learn more.

The secret to the tastiness of the pork chop buns is the family marination sauce that is use for the pork as well as the typ of pork they use. The said that they only use top quality pork from Brazil that has a low fat ratio. Their traditional pork chop bun comes with baguette bread and it is only available in the afternoon after 2pm. However, they do offer different variations of their pork chop bun and I really like the ones that is sandwiched between a buttery Bo lo bao which is shaped like a pineapple.

The nephew told me he grew up in the Tapia neighbourhood and even though he studied overseas in Canada, Macao is where is family and his heart is so he came back to help his aunt to continue the family business. As the aunt recalled stories of how she had helped her mother since she was a kid in the store, I can see the pride they have in their family, in the quality of their food and in the business.

They kindly offered me to try their Serradura which is a traditional Macanese dessert. They said that it was one of the must-try food when visiting Macao. It means sawdust in Portuguese and made using a simple combination of whipped cream and crumbled Marie biscuit.

After my lunch we stopped by a century old pastry shop that had hordes of people queuing on the main street. This shop is none other than Pastelaria Fong Kei which is listed in the Michelin Food Guide for Macao.

If time had allowed, I’d love to check out the Taipa House museum but I guess that’s another spot for another trip! So if you are ever in Macao and would like to get away from all the casinos and bright lights, you know that these are some alternative destinations for you to explore. 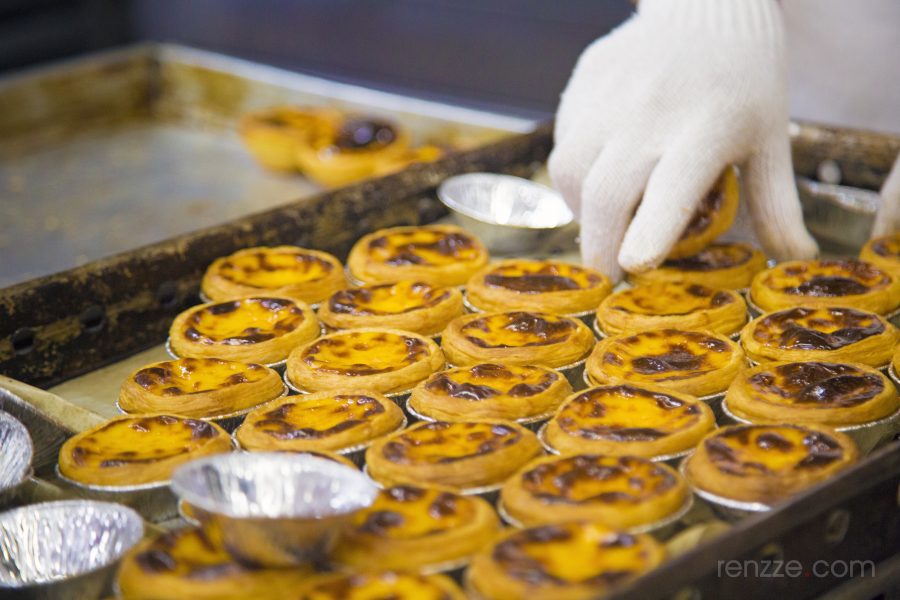