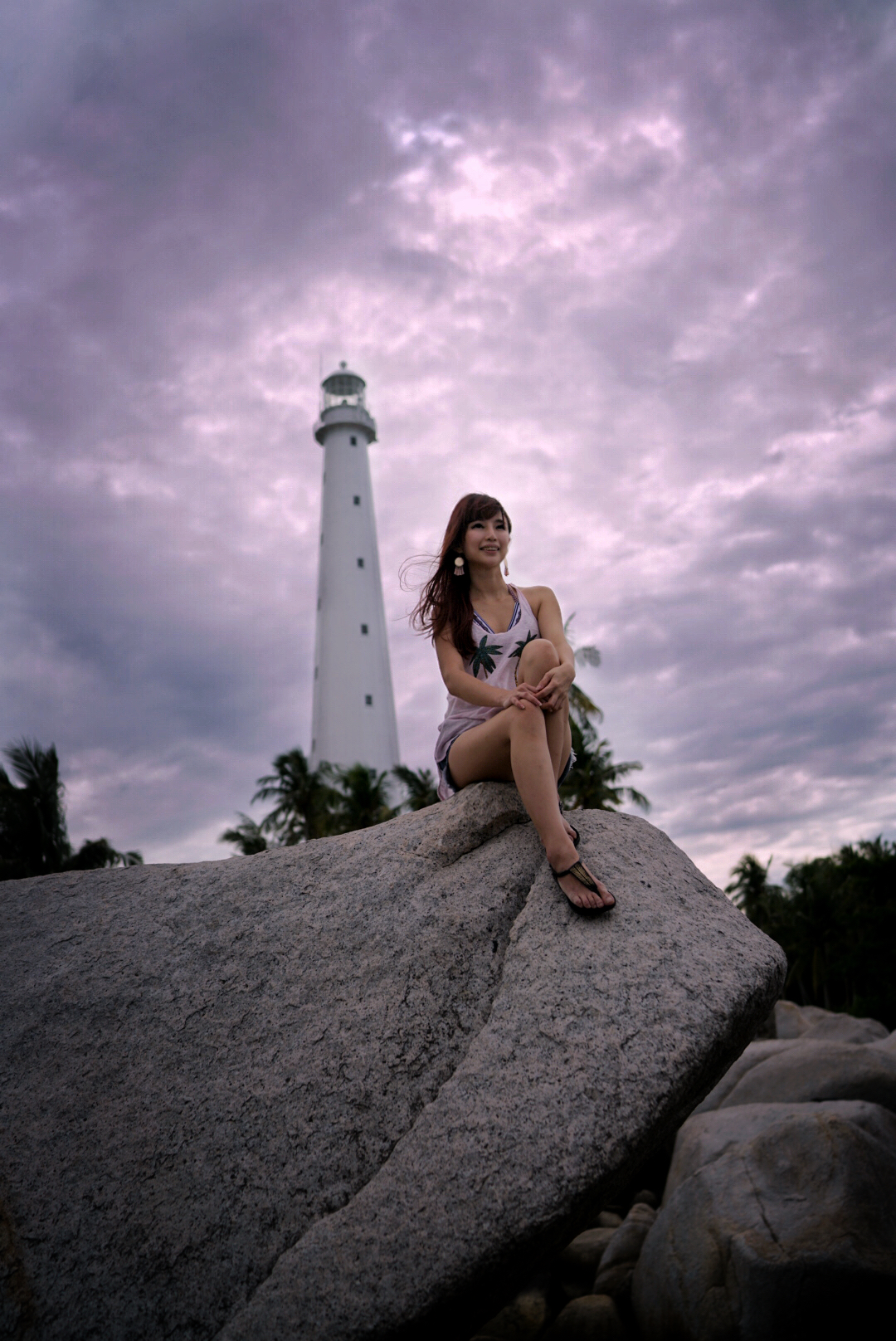 It’s not often that one gets to venture into ‘uncharted’ islands and I have to admit that before this, I had never heard of Belitung in Indonesia. It is one of those sleepy towns that make for a great place to explore before the sudden surge of tourism hits it.

Thanks to a lovely invitation from Visit Indonesia Office, I was booked on the inaugural charter flight from Singapore to Tanjung Pandan. Surprisingly, it only took an hour to be transported via Sriwijaya Air to paradise. I do hope that tourist interest in the island picks up enough to keep this charter flight running permanently.

The best time to visit the island is from March to September. I went during the monsoon season which is not the best time. However, if what I saw was the worst of Belitung, then I can’t wait to go again during the better seasons when the waters are calmer, clearer and bluer and the sunsets more breathtaking.

Here are some of the best things that the island has to offer.

These gorgeous blue lakes are an unwitting creation of man and nature. The huge holes of the Kaolin mines are filled up with rainfall water over time, and the unique composition of minerals gives the ‘lakes’ is light blue colour. The day that I visited was overcast and cloudy. Even so, the blue was pretty stunning. It’s supposed to be even prettier on a hot clear day. In the dry season, you’ll even see ‘icebergs’ as some white mounds of Kaolin would be visible due to the low level of water in the ‘lake’.

Belitung is a developing island. In an island at least 4 to 5 times bigger than Singapore, it has only eight petrol stations, so you will come across petrol being sold in plastic or glass containers in little shacks by the road.

There is one KFC (oh yes, there is no McDonald’s) and one Burger King. All these mean that you are more than likely to get an authentic untainted local vibe.

The people of Belitung are so amiable, and I had so much fun interacting and photographing them at the local market. They smiled and chatted with me despite the language differences. Oh, and there seem to be cats everywhere too!

For many of us coming from first world countries, it’s quite an eye-opening experience to soak in the hustle and bustle of a traditional market. You’ll see people haggling for vegetables, children working alongside their families at the stores, motorbikes converted into drink mini stalls, and you will witness chicken drumsticks on display above actual live chicken in cages below. These market are not for the faint-hearted.

Almost everyone knows everyone else, so crime rates are pretty low. I asked a local family if I could use their washroom and they merely waved me into their unlocked and unguarded empty home while they continued chatting outside.

You also get a taste of authentic home cooked sharing dishes in most places. I like all the little Indonesian kuehs (desserts) because they taste so soft and fresh. There are quite a lot of street food and exciting fruits that I didn’t have time to explore as well.

Seafood lovers are in for a treat! In Belitung, seafood is both cheap and abundant! Crabs, prawns, fishes and all types of shellfish.

One of the more popular dishes is deep fried Calamari. My travel mates were raving about the steamed flower crabs too.

If you go in the right season, do give the cheap and lovely kampong durians a try as well.

If you are up for a little bit of trekking, take a hike up Peramun Hill to see a bird’s eye view of the island. A beautiful place to be one with nature and to soak in the sounds of the forest.

If you go during sunset, you could even stay to catch a glimpse of endangered Horsfield’s tarsiers. The Rangers will arrange some lovely tea and small bites for you to eat under the glow of traditional Kerosene lamps as you wait for the tarsiers to appear.

They are the tiniest primates in the world and would win you over with their huge eyes! Currently, there are eight pairs of tarsiers at Peramun Hill and each pair mates for life.

There are so many beautiful islands in Belitung, and you can easily spend a whole day snorkelling and island hopping. One of the most popular islands is Palau Lenkuas which is distinctively recognised by a white lighthouse.

This lighthouse was built in 1882. It was cast in England, brought to Indonesia then developed by the Dutch.

You can climb up to the top for a 360 degrees view of the beautiful waters.

The island is a lovely spot for photos. I had fun climbing up the abundant rocks to check out various aspects.

Don’t forget to grab a fresh coconut drink to cool down while you chill on the beach.

Your boat operator will be more than happy to take you to snorkel spots and pass you some bread to feed the fishes! I didn’t go into the waters this time, but I could already see fish just staring above the surface of the seas.

Other islands you shouldn’t miss out are Pulau Basir, Pulau Burong and Pulau Batu Pelayar.

I know many who just can’t skip their daily cup. The locals love to gather at Kong Djie Coffee which showcases their traditional provincial coffee.

I enjoyed watching the coffee lady work her magic with the super huge coffee jugs with their signature long spouts. There is so much character in their coffee shops.

The atmosphere was just incredibly vibrant. The traditional coffee is thick, rich and very sweet (due to the condensed milk added).

Pantai Tanjung Tinggi is the film site of one of Indonesia’s most popular movie “Laskar Pelangi” (The Rainbow Troops). The movie was produced in 2008 based on a novel by Andrea Hirata. There are some stores before you reach the huge boulders at the entrance to the beach.

The stores sell everything from food and fresh coconut to polished seashells and meteorite jewellery. I was fascinated by the meteorite stones  (“Billitonites”) which are known as  “Batu Satam” locally.  These were found by tin miners exploiting alluvial cassiterite ores to a depth of 30 feet or more below the present ground surface. As mining in Belitung is significantly reduced to prevent further environmental harm, the discovery of these billitonites are also getting less frequent.

At the Pantai Tanjung Tinggi beach are lots of huge granite boulders, climb onto a nice sized one and watch the sunset on the horizon. I saw some spectacular sunset photos taken by others, but since I was there during the monsoon period, the sky was pretty cloudy.

Where to Stay in Belitung

I stayed in two hotels during my trip to Belitung, and they are probably one of the best choices on the island. If you want to be somewhere central, you can stay at the BW Suite Belitung. It is located right next to a beach, and there is an infinity pool looking out to the sea. While I didn’t spend too much time indoors, I was told that they had billard, karaoke and movie facilities available.

The other hotel I stayed at is much further away from the towns, and it is called Santika Beach Resort. This beach resort is probably my favourite hotel in Belitung. Also located right on the beach with an infinity pool, this resort is very new. They even had a lovely nest-like lounge chair found on the balcony of every room.

Now that you know what Belitung has to offer, it’s time to plan your next vacation!