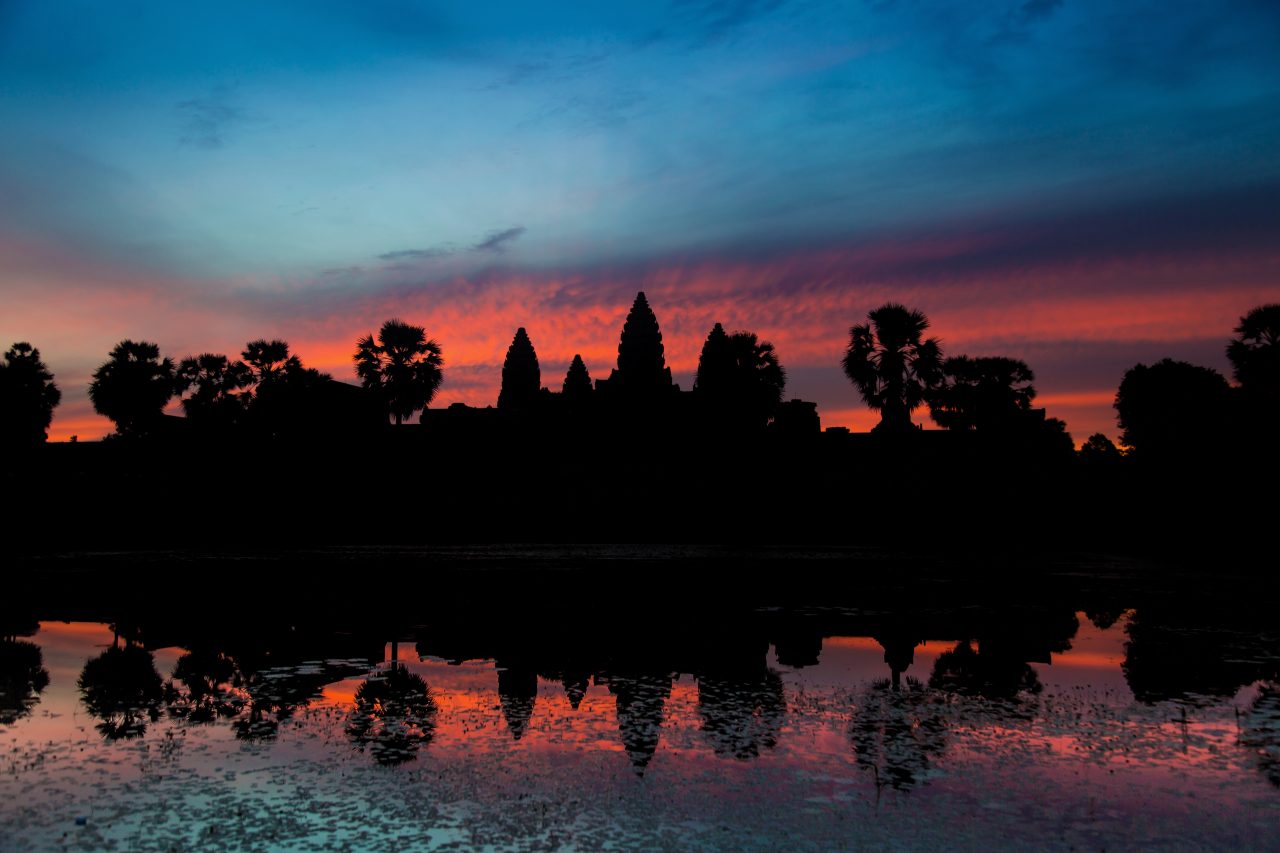 As mentioned in my previous post on my introductory post to my visit to Cambodia, the main reason why I wanted to go Siem Reap is to visit the famous wonder, Angkor Wat. With such a renowned temple, do expect crowds of tourists and travellers. After being there and learning so much, I’m going to be sharing seven secrets tips so that your visit to Angkor Wat would be even more spectacular than mine.

SECRET TIP 1: Get your Angkor Pass

Anyone (unless you have Cambodian citizenship) visiting Siem Reap and would like to access the various temples in the Angkor Archaeological Park area needs to have an Angkor Pass. You can buy the pass at the Angkor Conservation Area which is open 5am to 5.30pm every day. The address is at Krong Siem Reap, but it’s not essential to know the address. Just hop on to any tuk-tuk and tell them that you want to buy the tickets to Angkor Wat and they will immediately know where to take you.

Tickets are not refundable or transferable. They will take a photo of you with their webcam to put on your pass so do make sure that you are decently dressed and cover your shoulders and knees as that is the dress code requirement for most of the temples in Cambodia.

If you are taking the one day pass, head to the counters on the far right side. The queues for the one day pass are usually the longest. If you intend to catch the morning sunrise, you should be there once the ticket office opens. After buying your tickets, you would still need to travel a bit before you finally get to the temple site.

To avoid the morning queues for one-day pass, you can consider going to the ticket office the day before, between 5 pm to 5.30pm. Only one-day pass tickets that are bought after 5 pm and before 5.30pm will still be valid the next day. If you are travelling with children below 12 years old, they don’t need a pass; just their passport as proof of their age.

SECRET TIP 2: Capturing the Sunrise with the reflection pools

It gets incredibly crowded as everyone gathers here to capture the sunrise. Get in early and find your spot quickly because there will be a lot of tourists! Everyone camps in front of the reflection ponds to capture the most stereotypical sunrise shot of the Angkor Wat.

There are two reflection pools in front of the temple of Angkor Wat. Some guides would recommend the North pool while others advocate the South pool. My advice is just head towards the pond that has fewer people because you get spectacular photos from either one. Your priority should be minimising the number of people in your shot.

I didn’t get there as early as I would have liked because I didn’t have all these secret tips I’m giving you here. However, I got lucky because the sun took an hour before it rose to her full glory. It just got prettier and prettier as time passed. Despite the insane amount of tourists, it is still one of my most memorable sunrises.

Cambodia is an extremely hot and humid country. I chose to go in the fringe of the rainy season where there are fewer tourists yet just enough rain for the reflection pools. In respect to the culture, I chose outfits that were made out of light fabrics and long enough to cover my knees. If my dress or top covered my shoulders, it was perfect. If not, I also had a little light shawl in my handbag. The morning can be a little chilly, and my wrap came in handy as an additional layer as well. Most parts of the Angkor Wat complex did not have any strict dress code, but if you intend to climb up to the central sanctuary, it’s a requirement.

SECRET TIP 4: Getting to know Angkor Wat and her little secrets

Angkor Wat is a temple complex and the biggest religious monument in the world on a site measuring 162.6 hectares built in the 12th century. The entire city of Angkor used up way more stone than all the Egyptian pyramids combined. The whole complex also occupies an area significantly bigger than modern-day Paris. The Egyptian pyramids which use limestone quarried barely 0.5 km whereas the entire city of Angkor used sandstone quarried from Mount Kulen 40 km or more away!

The Angkor Wat moat is not just there to beautify or fortify the main temple. The canal is a part of a vast groundwater system that helps stabilise the temple foundations through Cambodia seasonal flooding and drought.

SECRET TIP 5: Wander away from the tourists

The crowd will slowly start to disperse after the sunrise. Most will head into the central area of the temple from the middle. I chose to move away from the tour groups that were following their guides through the main door of the temple. Instead, I went around and entered through one of the side entrances.

There are a lot of beautiful walkways and walls filled with bas-relief friezes. The carvings on the walls show a series of large-scale scenes depicting episodes from the Hindu epics. Look out for three of the most famous reliefs depicting: the Battle of Kurukshetra (western gallery), the Churning of the Ocean of Milk, and the impressive Army of Suryavarman II (south side) – showcasing the military might of the King who built the temple. My favourite one is ‘Churning of the Ocean Of Milk’  which shows asuras and devas churning the ocean using the serpent Vasuki under Vishnu’s direction.

There is so much beauty in the architecture of the building to take in at different parts so don’t feel like you are missing out just because you are in an area where it seems quieter. I love the little empty corners where I could capture the essence and the grandeur of the temple without being disturbed.

If you are observant enough, you can spot bullet holes on the outer pillars of the temple left there during Cambodia’s civil war. Luckily, the temple was somewhat sheltered from destruction as it was quite hidden by the surrounding jungles.

SECRET TIP 6: Participate in an ancient blessing ritual from a monk in the temple

The sacred Buddhist water blessing is a local ritual to help cleanse, protect you from evil spirits and bring you luck. I stumbled upon this practice at the temples and was encouraged by the locals as well as the monks to give it a go with an open mind.

In Cambodia, when they receive a full water blessing, it usually means getting drenched with buckets of holy water poured over your head! If you are okay with that, it will be a memorable experience. However, if you still have quite a bit of ground to cover and are not prepared to change clothes or get soaked, you can get a milder version of a water blessing inside Angkor Wat.

There are few monks situated in the inner courtyard sitting on mats. Just sit in front of one and tell him that you would like a water blessing. He will then start chanting, wishing you good luck, safe travels, and a long life. Next, you get light sprinkling of holy water. At the end of the ritual, he will then tie a red string on your wrist. You can keep this on you for as long as you want until it falls off on its own. While I’m not a Buddhist, I believe in embracing the culture and the general goodness of most orthodox beliefs.

The Angkor Pass which gives you access to more than just the Angkor Wat Temple. Since I only bought the one-day pass, I had to strategically plan my day to include places like Ta Prohm and Roluos group. I will share photos taken at these locations once I get them sorted out. 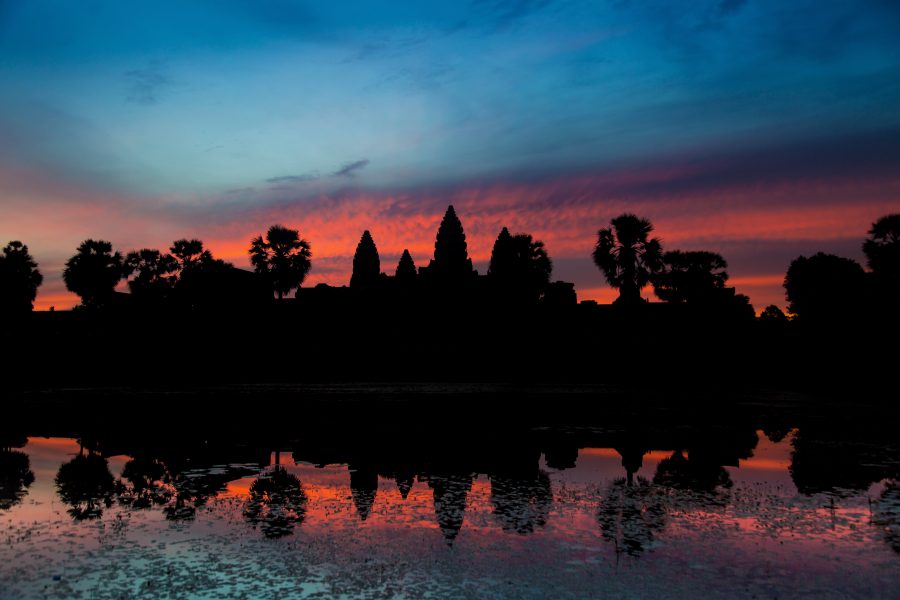